The Sunday Telegraph reports that the government plans to announce reducing the social distancing limits from 2 metres to 1 metre on Tuesday if people take additional measures such as wearing a mask. But the committee, chaired by former Chief Scientific Adviser, Sir David King, say that transmission of virus in the country is still too high and that it is not safe to do so.

It publishes a review of the scientific evidence today and says that reducing to 1 metre indoors will mean the end of social distancing measures in Britain as it effectively messages a ‘return to normal’.

Until there is evidence that infections have dropped to much fewer than 1,000 cases a day, it says it is not safe in indoor spaces particularly in restaurants, bars, or workplaces where it notes, people tend to lean toward each other when they speak.

It says the government is ignoring the advice from its own SAGE committee and that it is now ‘crucial’ that the government publishes the underlying evidence behind the proposed change of rules as the public and businesses will now need to make their own risk assessment.

Changing the rule from 2 metres to 1 metre would see BME communities and low-paid workers put at most risk, the report notes, as a higher proportion will be unable to work from home and will be most exposed to the virus. ‘Reducing distancing will make these populations less safe, running the danger of making already stark health inequalities much worse.’

The change will heighten the risk of further outbreaks which at present there is no way of effectively containing, the report says, with widespread acknowledgement that the government’s contract tracing system is not ‘fit for purpose’. The government has failed to acknowledge the findings of Independent SAGE’s previous report about ‘Test & Trace’ nor has it produced the evidence the committee has asked for.

The report assesses the risk of virus transmission to be far higher indoors and notes that 97% of ‘superspreader events’ globally have occurred in indoor settings.

Sir David King, former Chief Scientific Adviser, said: ‘It is extremely concerning that the government appears to have decided to ignore the scientific advice of its own SAGE committee. That quite clearly says it it is soon to reduce the distance from 2 metres to 1 mature.. Independent SAGE has done its own review of the available evidence and we agree with SAGE’s conclusion.

‘The rate of infection is still far too high to consider this even with mitigating measures. There are more 1,000 new cases a day and still no functioning tracing system. It is vital that the government releases the evidence it has used to make this decision.’

Stephen Reicher, Professor of Social Psychology at the University of St Andrews said: ‘It is too soon to reduce social distancing from 2 metres to 1 metre. The proposed reduction will have behavioural consequences and, in effect, dump the concept of distancing altogether. It sends a ‘back to normal’ signal when we are still in the middle of a deadly pandemic.

‘We need to remain more on guard than ever. And it is crucial that we see the full evidence being used by the government to override the scientific advice from its own SAGE committee.’ 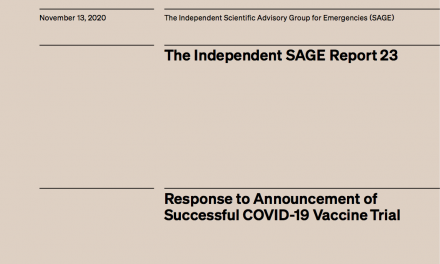